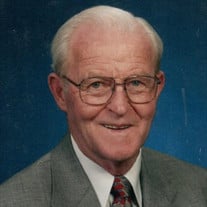 Not sure what to send?

Robert Lorin Wilson, 91, of Vienna, WV, passed away at his residence on May 7, 2022 with his loving family by his side. He was born September 18, 1930, in Malden, MA, a son of the late John E. and Lillian (Steele) Wilson. Bob graduated in 1948 from Brandeis Vocational High School in Boston, MA. He joined the United States Air Force and proudly served his country for 21 years. Bob served in the Korean War and during the Vietnam Conflict. He was stationed overseas in five countries and stateside in seven states serving in the Communications Squadron. After retiring from the service at the age of 38, he embarked on a second 25 year career as a homebuilder. He was a member of the Homebuilders Association and owned Robert L. Wilson Construction Company. He built many homes and businesses in the Vienna-Parkersburg area, including his own home, which he took great pride in. Bob was a committed family man, gentle, honest, kind, humble, loving and humorous, with a quick wit that kept people laughing. He always helped family, friends and strangers in a quiet unpretentious way and had a heart of gold. Bob was a hard worker, never stopping during the day, except for his 30 minute nap after lunch. He enjoyed fishing, gardening, tinkering with antique clocks, spending hours looking at coins for old dates and listening to country western music. He persevered through many health challenges without complaining and when asked how he was doing, he would always reply “Just fine”. Bob was our family’s rock and in his illness and physical weakness we saw his inner strength, his faith and desire to fight to be on this earth as long as God had something to accomplish through him. Bob was a faithful member of Stout Memorial United Methodist Church for more than 40 years and his great joy was listening to the choir. He served on the Board of Trustees overseeing and helping with many projects. He is survived by his devoted wife and soulmate of 69 years, Mary Ellen (Montgomery) Wilson; his adoring daughter, Vicki Linn Mueller of Vienna, WV; two precious grandsons, Adam Robert Mueller of Vienna, WV and Austin Michael Mueller of Charlottesville, VA, who brought him great joy being a “Grampy”; sister in-law, Sandra Montgomery of St. Petersburg, FL; brother in-law, Larry Montgomery of Vienna, WV; three nieces, Marie Wilson of Saugus, MA, Susan Hansche of Annandale, VA and Julie Montgomery of Elizabeth, WV; nephew, John Hansche of St. Petersburg, FL; and other nephews and nieces in the MA area. In addition to his parents, Bob was preceded in death by two sisters, Thelma (Hazen) Brown and Ruth (John) Seaman; five brothers, John (Margaret), Kenneth (Doris), William, Donald (Bunny) and Richard (Betty) Wilson all of MA; father in-law and mother in-law, Clay and Rosalia Montgomery of Vienna, WV; his brother in-law and sister in-law, Fleet and Maxine Argabrite of Vienna, WV; and sister in-law, Judy Montgomery of Vienna, WV. We will celebrate Bob’s life at 11:00 am on Saturday, May 21, 2022 at Stout Memorial United Methodist Church, Broad St. Parkersburg with visitation one hour prior to the service. Interment will be at Mt. Olivet Cemetery at a later date when his ashes can be joined with his wife’s ashes. To honor Bob, tell someone you love them, do an act of kindness or help a person in need. In lieu of flowers, donations may be made to Stout Memorial United Methodist Church, 3329 Broad St. Parkersburg, WV, 26104. Habitat for Humanity P.O. Box 462 Parkersburg, WV, 26102 or Vienna Wesleyan Church, 1010 13th Ave, Vienna, WV, 26105. The family would like to thank Amedysis Hospice for their extended care, especially to Carrie and Courtney. Lambert-Tatman Funeral Home and Crematory, Vienna is honored to serve the Wilson family.

The family of Robert L. "Bob" Wilson created this Life Tributes page to make it easy to share your memories.

Robert Lorin Wilson, 91, of Vienna, WV, passed away at his residence...