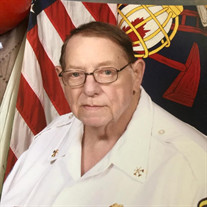 Vienna Asst. Fire Chief Larry Lee Goodwin, loving husband and father, passed away on August 18, 2021, at the age of 74. Larry was born May 8th, 1947 in Belington, WV to the late Wilbert and Lucille (Bennett) Goodwin and graduated from Cowen High School in 1965. He worked for Ames True Temper in Parkersburg until his retirement in 2003. On April 29, 1972 he married Mary Susan Gay of Charleston, WV. They raised one son, Patrick, of Wardensville, WV. Larry devoted nearly 50 years to the Vienna Volunteer Fire Department eventually serving for more than a decade as the Assistant Chief and President. He was awarded Firemen of the Year in 2002 and served for 12 years on the WV state fire Commission. He also served as Co-Chairman of the WV state Fallen Firefighters Memorial committee responsible for the memorial on the grounds of the Cultural Center in Charleston. He devoted many years to Vienna Recreation as a tee ball coach and was a member of Nemisis Shriners, the Grotto, and Vienna Masonic Lodge. Larry was preceded in death by his father, Wilbert (Buck), his mother, Lucille, as well as his brothers, Denny, David, Danny, and Donnie. He is survived by his wife Sue; son, Patrick; sister, Helen (Cookie); sisters-in-law, Alice (Mike) Abernethy and Dale Goodwin; brother-in-law, Doug Boggs; best friends, Doyle Burkholder and Kathy Woolard; fur baby, Amelia; and several nieces and nephews. A funeral service will be held at 11:00 am on Monday, August 23, 2021 at Wayside United Methodist Church with Pastor Sara Lamb and Rev. Mike Richards officiating. Burial will follow in Snodgrass Cemetery at Gandeeville, WV. Visitation will be from 2-4 pm and 6-8 pm, Sunday at the Lambert-Tatman Funeral Home, Vienna and one hour prior to the funeral service Monday at the church. Online condolences may be made at www.lamberttatman.com.

Vienna Asst. Fire Chief Larry Lee Goodwin, loving husband and father, passed away on August 18, 2021, at the age of 74. Larry was born May 8th, 1947 in Belington, WV to the late Wilbert and Lucille (Bennett) Goodwin and graduated from Cowen... View Obituary & Service Information

The family of Larry L. Goodwin created this Life Tributes page to make it easy to share your memories.

Send flowers to the Goodwin family.