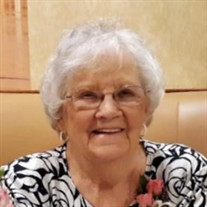 Eva J. Wilson, 91, passed away peacefully at her home on January 26, 2022, with her family at her side. She was born May 31, 1930 to the late Clifford and Nell Hupp and grew up in Ravenswood, WV. The family moved to Parkersburg and Eva graduated in 1948 from Parkersburg High School where she met her future husband, William “Bill” Wilson, They were married in 1949 at Pettyville United Methodist Church and began life on Market Street where Eva walked to work at Cox’s Department Store. She even did some modeling work for the store at times. In 1953, her son Stephen was born so Eva took some time off until 1970 when she began working for Blue Cross & Blue Shield in the accounting department and retired after 15+ years of service. Eva enjoyed playing bridge with her friends and supported PSHS band boosters while Steve was in school and later at WVU. Eva and Bill loved to travel and visited Brazil, South Africa, Paris, Hawaii and took numerous cruises over the years. Their summer vacations found them of the beaches of Hilton Head Island, SC. They were married for 62 years until Bill’s passing in 2012. She was a long-standing member of Pettyville United Methodist Church and she followed all the activities that her grandchildren and great-grandchildren were involved in. She is survived by her son, Stephen (BethAnn) Wilson; grandson, Jim (Kari) Wilson; granddaughter, Holly (Jonathan) Byrd; great-grandchildren, Izzabella Wilson, Wade Byrd, Zach Sheppard and several nieces and nephews In addition to her parents, Eva was preceded in death by her parents; husband, Bill Wilson; brother, Donald B. Hupp and Sister, Nancy (Hupp) Moore. Those that knew her can absolutely attest to her kind heart, her willingness to be of service and her loving nature towards all. That love was also extended to a few furry friends throughout her life. Funeral services for Eva will be held at 12 PM, Wednesday, February 2, 2022 at Lambert-Tatman Funeral Home, 2333 Pike Street, South Parkersburg with Pastor Mark Watkins officiating. Burial will follow in Sunset Memorial Gardens of Parkersburg. Visitation will be Tuesday, February 1, 6PM-8PM at the funeral home and one hour prior to services on Wednesday. The family appreciates all the care given to Eva by Amedysis Hospice and requests in lieu of flowers that donations be made to the Amedysis organization at 2200 Grand Central Ave, Vienna WV 26105.

Eva J. Wilson, 91, passed away peacefully at her home on January 26, 2022, with her family at her side. She was born May 31, 1930 to the late Clifford and Nell Hupp and grew up in Ravenswood, WV. The family moved to Parkersburg and Eva graduated... View Obituary & Service Information

The family of Eva J Wilson created this Life Tributes page to make it easy to share your memories.

Eva J. Wilson, 91, passed away peacefully at her home on January...

Send flowers to the Wilson family.