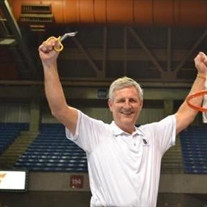 Heaven gained a very large angel on November 21, 2020, as Scott Lee Stephens, 65, of Mineral Wells passed away after a brief but courageous battle with cancer. Scott was born on April 18, 1955 on a military base in Japan to Betty Melrose Stephens and the late Lt. Col. Jack V. Stephens. He grew up in a military family, spending his childhood on bases across the world. From Japan, to Germany, to Texas and finally back to Parkersburg, WV where he met a cute but slightly nerdy girl in his high school class. Their high school romance blossomed into true love and he married his wife Linda in June of 1977. They went on to have three daughters, Anne, Jill and Kim. Scott founded Phoenix Associates in 1985 and the company grew from a small general contractor to a well-respected business, constructing buildings from the original Lowes in Vienna to several churches around town and many more. As his daughters grew up, Scott got involved with coaching youth basketball starting with small fry leagues on Saturday mornings, to elementary school and travel teams. In 1999 he joined the Parkersburg South High School Girls’ Basketball coaching staff as an assistant and in 2003 moved into the head coaching role. He coached the Lady Patriots for 13 years, taking them to many state tournament appearances and three state championships. In 2016, he retired from South to take the Assistant Coach position at Glenville State College, where he reported to his daughter Kim, and was a part of four regular season conference championships. Scott loved all aspects of coaching, he spent countless hours watching game film and recruiting. But what he loved most was building up the young ladies on his teams and helping them to become the most confident and successful people they could be. In 2019 Scott became a CASA (Court Appointed Special Advocate) to work with children and make sure they had a voice in family court proceedings. He truly wanted to make the world a better place. Scott was an excellent hugger, if you had the pleasure of hugging him, you came away knowing you were loved. He also had a strong handshake that, combined with his 6’10” stature, had been known to intimidate a referee from time to time. He loved a practical joke. From something as simple as the “shoulder tap” to an elaborate scheme, pranks of all forms brought him great joy. He loved a good long walk with his wife Linda. He enjoyed a good game of golf and a beer with his buddies afterwards. He enjoyed cooking and was becoming a talented pizza chef and a master griller. He lived life to the fullest. Perhaps most importantly, Scott was a follower of Christ. He was a member of Lubeck Community Baptist Church and strove to shine God’s light out into the world. His motto was “3G” Give God the Glory. It was the theme for his State Championship teams and has been a theme throughout his life. Even as he was awaiting brain surgery at the Cleveland Clinic, he befriended another neuro patient and they got to talking about God, spreading the word and love in the dark times. The refrain of one of his favorite hymns was “fly to Jesus, and live” and we know that’s just what he’s doing now. Scott is survived by his mother Betty Melrose Stephens, sister Marqueta Stephens, brother Brad Stephens, his beloved wife Linda, his three daughters, Anne (Paul McCalla), Jill (Kurt Huizenga), and Kim, and one treasured grandson, Nate Huizenga. He was an excellent husband and father and a doting Grandpa. Words can’t express how much he was loved and how much he will be missed. But his family will strive every day to bring glory to God in his memory. A celebration of Scott’s life will be planned at a later date. In lieu of donations or flowers, the family asks that you do a random act of kindness in Scott’s honor to give God glory. 3G! Lambert-Tatman Funeral Home, 2333 Pike St, Parkersburg is honored to assist the Stephens family with Scott’s arrangements.

Heaven gained a very large angel on November 21, 2020, as Scott Lee Stephens, 65, of Mineral Wells passed away after a brief but courageous battle with cancer. Scott was born on April 18, 1955 on a military base in Japan to Betty Melrose Stephens... View Obituary & Service Information

The family of Scott Lee Stephens created this Life Tributes page to make it easy to share your memories.

Send flowers to the Stephens family.