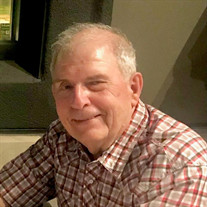 Robert H. (Bob) Reger, Jr of Vienna, WV died June 30, 2021 at Tucson, AZ of a massive stroke. He was born October 8, 1942 in Buckhannon, WV, a son of the late Robert H. and Gwen Finlayson Reger. He is survived by his wife, Kathy Reger of Tucson, AZ; a son, Michael Brown Reger of Vienna, WV; brother, Jack Reger (Barb) of The Villages, FL; sister-in-law, Harriett Ann Northey (Wayne) Bridgeport, WV; brother-in-law, Neil Albaugh (Joline) of Tucson, AZ; three nephews and three nieces. Preceding him in death were his first wife of 52 years, Betsy; brothers, Bill and Jim; and sister-in-law, Frani Reger. He graduated from Buckhannon-Upshur High School and West Virginia Wesleyan College, where he was a member of Kappa Alpha Order. Mr. Reger retired in August 2000 from Dominion Hope with 32 years of service in the sales and marketing department. He was a former member of the following Boards of Directors: United Way of the Mid-Ohio Valley; Home Builders Association of the Mid-Ohio Valley; Boys and Girls Club of Parkersburg; and the Wood County Senior Citizens Association. He also served on the Alumni Council of West Virginia Wesleyan College and was a member of Wesleyan’s Emeritus Club and of the Parkersburg Country Club. He had previously served the Parkersburg Chamber of Commerce as Chairman of the commercial Development Committee and was past President of the Vienna Civitan Club. He enjoyed officiating high school football and basketball games for 15 years and was a former member of the Ohio-West Virginia Officials Association in Parkersburg. Bob also coached youth league baseball and basketball for the Vienna Recreation and Improvement Association for 9 years and worked the Cub Scouts as a Webloes leader. Time spent with friends and family at his mountain getaway in Canaan Valley, Ocean City, Maryland; Beechwood Camp on the Buckhannon River; and listening to oldie “doowop” concerts were many special memories. In his later years, he enjoyed traveling to Rome and Soriano nel Cimino, Italy; Kauai, Hawaii; 3 cruises to the Caribbean Islands, trips to Lake Powell and the Grand Canyon and Mexico. A frequent destination became Tombstone Monument Ranch where he and Kathy spent many hours on their favorite horses, Texas Two Step and Sundance. Bob was an active member of the Wayside United Methodist Church in Vienna, where he had served as an usher, lay leader, delegate to annual conference, finance committee member, staff parish chairman, administrative board member, member of United Methodist men and was a lay liturgist, sports activities director and he attended the Genesis Sunday School Class. In lieu of flowers, donations may be made to the Robert H, Gwen F and William L. Reger Scholarship Fund at West Virginia Wesleyan College, attention Advancement Office College Ave, Buckhannon, WV 26201 or to the building fund at Wayside United Methodist Church, 3001 Grand Central Ave, Vienna, WV 26105. A memorial service will be held 11:00 am on Thursday, August 5, 2021 at Lambert-Tatman Funeral Home, Vienna with Reverend Sara Lamb officiating. Visitation will be from 6-8 pm on Wednesday, August 4, 2021 at the funeral home. Bob’s cremains will be buried at the Heavner Cemetery in Buckhannon, WV.

Robert H. (Bob) Reger, Jr of Vienna, WV died June 30, 2021 at Tucson, AZ of a massive stroke. He was born October 8, 1942 in Buckhannon, WV, a son of the late Robert H. and Gwen Finlayson Reger. He is survived by his wife, Kathy Reger of Tucson,... View Obituary & Service Information

The family of Robert H. "Bob" Reger created this Life Tributes page to make it easy to share your memories.

Send flowers to the Reger family.