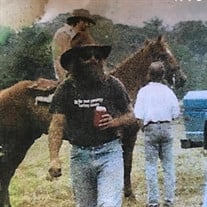 Kenneth W. “Kenny” Spence, 63, of Belpre passed away Wednesday, June 23, 2021, at the Marietta Memorial Hospital. He was born December 7, 1957, in Parkersburg, a son of the late Russell T. and Donna L. Lambert Spence. Kenny was a 1976 graduate of Warren High School, where he excelled in wrestling and was a state qualifier. He retired as a concrete finisher and enjoyed hunting and fishing. Kenny is survived by his two children, Jakala Bowling (Jeff) of the state of Washington and Jeremy Spence of Belpre; Yvonne Luman, mother of his children; his siblings, James Spence (Judy), Newark, OH, Russ Spence (Paula) of Cambridge, OH, Susie of Vienna, WV, Chip Spence (Cheryl) of Belpre and Robert Spence (Patty) of Belpre; two grandchildren Jeffrey and Jackson Bowling and several nieces and nephews and great nieces and nephews. In addition to his parents, he was preceded in death by his brother, Rocky Spence and his wolf dogs, Mona and Sooner. A memorial service will be held at a later date at the convenience of the family. Lambert-Tatman Funeral Home, Belpre is honored to serve the Spence Family.

The family of Kenneth W Spence created this Life Tributes page to make it easy to share your memories.

Send flowers to the Spence family.