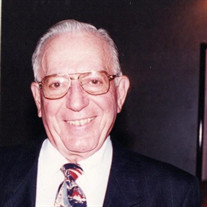 Joseph G. Troisi, M.D., died peacefully in his Vienna home on Sunday morning October 10th. He was one hundred years old having been born in a low-income immigrant neighborhood in Brooklyn, New York, on February 20, 1921. One of five children born to his parents, Gerardina and Raffael Troisi, his talents and drive propelled him to earn a medical degree from Georgetown University at 23 years of age. While in Washington, D.C., he met and married Clarice Lambert of Ellenboro, Ritchie County, West Virginia. They enjoyed sixty-seven years of marriage until Clarice’s death in January 2013. After a six-month internship Dr. Troisi was commissioned as a Captain in the United States Army and assigned to the military base in the Canal Zone of Panama where he served as Director of Obstetrics and Gynecology and post-natal care and was also put in charge of infectious diseases. The quality of his patient care and his stature as a physician were reflected in an unusual manner. Shortly after a new base commander was installed Dr. Troisi was summoned personally to his office. Upon presenting himself at base headquarters the commander told Dr. Troisi that while he had only assumed his post a week earlier, he had heard so much about Dr. Troisi from officers, soldiers and their wives that he wanted to meet him in person to ask one question: “Do you walk on water?” Dr. Troisi replied that he did not. He was twenty-five (25) years old at the time. The Army was eager to retain Dr. Troisi but he was determined to open a private practice in the immigrant community in which he was raised. He practiced OB-GYN in Brooklyn, New York, for fifty (50) years, during which he personally delivered more than 10,000 babies and was present to assist and to supervise his residents at more than 15,000 other births. Despite such a prolific and lengthy practice Dr. Troisi’s distinct accomplishment was that he never lost a mother. Not one. Despite his busy practice, Dr. Troisi dedicated his energy and expertise to the Community Mayors of New York, an organization which provides recreational therapy for thousands of children with special needs. A member for over 40 years, he received the Humanitarian Award for his dedication. Dr. Troisi was preceded in death by his wife, Clarice, his four siblings and a grandson, Dustin Troisi. He is survived by his five children: Gerardina Torres (George) of Vienna, WV, Joseph Troisi (Thomasine) of St. Marys, WV, Ralph Troisi (Patricia) of Waverly, West Virginia, Gloria Larkin (Tim) of Bridgeport, CT and Mary Troisi of Boston, MA, as well as seven grandchildren and several great grandchildren. With love and gratitude we will forever remember you, Dad.

Joseph G. Troisi, M.D., died peacefully in his Vienna home on Sunday morning October 10th. He was one hundred years old having been born in a low-income immigrant neighborhood in Brooklyn, New York, on February 20, 1921. One of five children... View Obituary & Service Information

The family of Joseph G. Troisi, M.D. created this Life Tributes page to make it easy to share your memories.