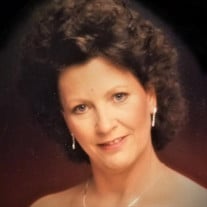 Janet Arlene (Butcher) Yoho, 70, passed away peacefully at her home on Thursday, April 22, 2021. Janet was born on July 5, 1950, at St. Joseph’s Hospital in Parkersburg. She was the eldest daughter of Floyd and Joyce Stephens Butcher. She was a graduate of Parkersburg High School, class of 1968. She was the first member of her family to receive a Bachelor’s degree from college. Janet grew up in Parkesburg, and spent most of her youth in and around the Coliseum skating rink, which was owned by her grandparents. She was a single mother, and loved children. She was an idealist who regularly sought justice, even when it wasn’t popular. She believed in recycling, passed on Earth Day, and donated her body to science. She enjoyed needlepoint, computer games, and puzzles of all varieties. Janet was a talented computer programmer in a time when there were not many women in the field. She spent most of her career as a contractor for various international companies, which allowed her to travel to many places across the globe. Janet is survived by a son, Scott (Theresa) Griffith of Michigan; a daughter, Sherry Miller of North Carolina; a grandson, Alex; three granddaughters, Meghan, Andrea and Rachel; and a great grandson, Mason. She is also survived by a brother, David Butcher of Belpre; a sister, Nancy Hickel of Larkmead; and numerous nieces and nephews. In addition to her parents, Janet was preceded in death by a brother, Terry Butcher. In lieu of flowers, the family requests that donations be made to St. Jude Children’s Research Hospital in Janet’s memory.

Janet Arlene (Butcher) Yoho, 70, passed away peacefully at her home on Thursday, April 22, 2021. Janet was born on July 5, 1950, at St. Joseph&#8217;s Hospital in Parkersburg. She was the eldest daughter of Floyd and Joyce Stephens Butcher.... View Obituary & Service Information

The family of Janet Arlene (Butcher) Yoho created this Life Tributes page to make it easy to share your memories.

Janet Arlene (Butcher) Yoho, 70, passed away peacefully at her...

Send flowers to the Yoho family.