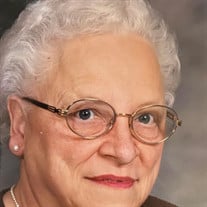 Proverbs 31:28-31 says, “Her children arise and call her blessed; her husband also, and he praises her: Many women do noble things, but you surpass them all. Charm in deceptive and beauty is fleeting; but a woman who fears the Lord is to be praised. Honor her for all that her hands have done, and let her works bring her praise at the city gate. Our sweet mother, Mary Alice Rice, 87, widow of Rev. Ernest G. Rice, passed away Wednesday, October 7, 2021 under the loving care of her daughter and son-in-law, Julie and Don Life. Alice, as she was known to many, was born on January 30, 1933 to the late Walter Arden Lee and Ida Jane Leasure Lee. Alice was one of twelve children growing up in Walker, West Virginia. Due to family situations before she was in her teens, she went and lived at the Union Mission. After a few years there, a handsome young man was volunteering at the mission and caught her eye and she married him in 1952. Alice graduated from Parkersburg High School in 1951 and married Ernest “Sonny” Rice on May 23, 1952. They raised three children together always making sure we were in church every Sunday. Sonny felt the call to be in ministry and Alice was very supportive of every endeavor he was involved in. In early years, they managed the Union Mission Halls Acres for orphaned children. Then they were called to manage the West Virginia Masonic Home for 17 years. While there Alice worked in the kitchen and the office as needed. After that ended, Sonny was called to be the pastor of Harrisville Baptist Church where they served for 10 years until his death on February 10, 1992. Following Sonny’s death, Alice became an in-home care giver, touching the lives of many elderly people that she took care of. Alice had been a member of many churches, but Harrisville Baptist was the one that she cherished the most. At the time of her death, she was a member of South Parkersburg Baptist Church, where she had many friends that she cherished as well. Left to cherish her memory are her children: David Rice (Vickie) of Saint Augustine, Florida, Julia Life (Don) of Mechanicsburg, Pennsylvania, and Virginia “Ginny” Prunty (Darron) of Parkersburg, West Virginia; grandchildren: Nicholas Life (Sarah), Nathan Rice (Shannon), David Prunty (Stacy) and Donnie Prunty (Nikki); great-grandchildren: Sophi, Lexi, Daniel and her special friend, Colin. She is also survived by one sister, Donna Jean Mullen. Alice was preceded in death by her husband, Rev. Ernest G. Rice; six brothers, one being her special twin brother, Henry Dallas Lee, and four sisters. Alice’s family will receive friends on Tuesday, October 12 from 2-4 and 6-8 at Lambert-Tatman Funeral Home on Green Street, Parkersburg. Funeral services will be on Wednesday, October 13 at 11:00 a.m. at the funeral home with Adam Paff officiating. Memorial donations in Mary Alice’s name made be made to Hospice of Central PA, 1320 Linglestown Road, Harrisburg, PA 17110; or online at hospiceofcentralpa.org. Condolences may be shared with the family by visiting lamberttatman.com

Proverbs 31:28-31 says, &#8220;Her children arise and call her blessed; her husband also, and he praises her: Many women do noble things, but you surpass them all. Charm in deceptive and beauty is fleeting; but a woman who fears the Lord is... View Obituary & Service Information

The family of Mary Alice Rice created this Life Tributes page to make it easy to share your memories.

Send flowers to the Rice family.