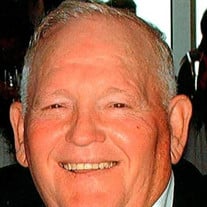 Lowell F. "Red" Swisher, 81, of Parkersburg, WV, passed away December 30, 2020 at Ohio Valley Health Care. He was born on May 1, 1939 in Clarksburg, WV the son of the late Paul and Mary Matheny Swisher. Red attended Burnsville High School and got his GED in the United States Air Force. On August 19, 1961, Red and Carolyn Harris were married at McGuire Air Force Base in Burlington, NJ. After the Air Force, Red and Carolyn raised their family in Fairless Hills, PA. Upon retirement they moved to Parkersburg, WV to be closer to family. Red enjoyed spending time with family and friends, traveling, “channel surfing,” listening to country music and telling jokes or stories. While in PA Red was a proud union member of the AFL-CIO, secretary of the credit union at work, and a member of the 11th Armored Division in NJ. He was well known for helping family, friends and even strangers with home and auto repairs. Red retired as a caster from American Standard in Trenton, NJ. When asked what he did for a living his response was “I made the best seat in the house, the toilet.” After retirement, one of Red’s favorite things to do was go to monthly breakfasts with his brother-in-law Audie and the retired truckers or going to breakfast with his cousin Linda Knight, especially to Cracker Barrel. He was a member of the Kanawha Alumni Association and formerly worked for Securitas as a guard to “give Mom a break!” In addition to his parents, he was preceded in death by the love of his life Carolyn Harris Swisher, son Lowell “Greg” Swisher, sisters Jacqueline Swisher Holt, Jorene Swisher Swiger, Alma Jane Swisher, brothers Kenneth Redcliff, Stanton Redcliff, and parents-in-law Alvin Glenn and Wanda Harris of Gilmer Station. Survivors include his daughter Michelle Swisher (Dee Ables) of Parkersburg; son Brian Swisher (Natalie McKown) of Parkersburg; grandchildren Devon and Harmony Swisher (mom Teresa) of Minerva, OH, Andrew Swisher (mom Valerie) of Davisville, WV, Chris Acquaviva and Joey Waggoner of Parkersburg; sister and brother-in-law Lois “CheChe” and Audie Krafft of Parkersburg; sisters-in-law Ann Redcliff of Ft. Pierce, FL and Cathy Lorbeck (George) of Flagler Beach, FL; brother-in-law Alvin “Pete” Harris of Bunnell, FL; aunts Margie Harper Weingard of Fairmont, WV and Catty Harper of Levittown, PA; uncle Harry Davis (Elizabeth) of Shelby Twp., MI and numerous nieces, nephews and cousins. The family would like to thank Amedisys Home Healthcare (especially Janet Turner) and Ohio Valley Health Care for the awesome care they provided Red over the past two years and all of the family and friends who have supported us through this trying time. We also appreciate the assistance of Lambert-Tatman Funeral Home with both Red and Greg’s funeral arrangements. Per Red’s request, his body has been donated to the West Virginia University Human Gift Registry. A joint memorial celebration for Red and his son Greg will be held, when it is safe to gather together, hopefully Summer 2021. In Red’s memory, please brighten someone’s day by sharing a funny story/joke or do a random act of kindness.

The family of Lowell F. "Red" Swisher created this Life Tributes page to make it easy to share your memories.

Send flowers to the Swisher family.