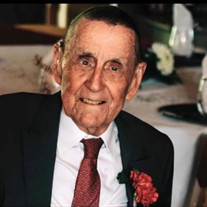 Charles T. “Tom’ Lytle of Vienna, WV, passed away Tuesday, March 9th, 2021 at Wyngate Senior Living Facility. He was born February 1st, 1928 a son of the late Ralph Curtis and Carrie Evans Lytle. Tom is preceded in death by his wife of 48 years, Virginia ‘Nan’ Curry Lytle. Tom graduated from Parkersburg High School in January, 1946 and continued his education at Ohio Northern University, where he completed his bachelor’s degree in Pharmacy in 1955. He served his community as a pharmacist in several drug stores, with his longest tenure at Vienna Pharmacy from 1955 – 1986. Tom was a member of Wayside United Methodist Church from 1957 – present where he was an avid participant in groups like United Methodist Men, choir and other various committees. Tom’s military career went from 1946 to 1952 as a Sergeant in the Marine Corps. He was a member of Marine Corps League - Sergeant Bob O’Malley Detachment 1436 in Marietta, OH. He was also a Master Mason with Vienna, WV Lodge #172 AF & AM. For over thirty years, Tom’s greatest joy was camping in his motor home at Holly River State Park during the spring and fall seasons. Fly fishing for trout in local streams, riding his restored Honda Trail Bike along gravel paths and sitting around a simple campfire telling stories were some of his favorite outdoor activities. Holly River was truly Tom’s favorite place of rest and relaxation. He also loved taking fishing trips to Canada. He was preceded in death by his brother, Foster Martin Lytle, sisters, Phyllis Martha Lytle John and Charlotte Anne Lytle Sweeney and brother who passed at birth, George Evans Lytle. He is survived by three daughters, Martha Lytle Smith (Galen) of Charlotte, NC, Sara Lytle Barker (Mike) of Ona, WV and Phyllis Lytle Buskirk of Vienna, WV. Tom is also survived by five grandchildren, Amanda Smith, Carrie Buskirk, Derek Barker (Courtney), Emily Smith (Will) and Zachary Barker. Visitation will be held from 4:00-6:00 pm on Saturday, March 13, 2021 at Lambert-Tatman Funeral Home, Vienna. A private graveside service will be held at Mt. Olivet Cemetery with Reverend Sara Lamb officiating. The Final Salute will be conducted at the cemetery by the members of the Marine Corps League - Sergeant Bob O’Malley Detachment 1436 of Marietta, OH. In lieu of flowers the family suggests donations may be made to the Wayside United Methodist Church or the Holly River State Park. For those wishing to attend the visitation, CDC guidelines will be followed, social distancing will be observed and masks are mandatory. Online condolences may be made at www.lamberttatman.com.

The family of Charles T. "Tom" Lytle created this Life Tributes page to make it easy to share your memories.

Send flowers to the Lytle family.