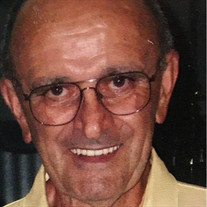 Yale "Kokey" C. Patton Jr., 84, of Deltona, FL (formerly of Parkersburg, W.V.), passed away peacefully January 30, 2021 at Fish Memorial Hospital in Orange City, Fla. He was born in Belle, W.V. on February 5, 1936 to the late Lucy Elizabeth (Keeney) and Yale Custer Patton. He was a 1954 DuPont High School graduate and his basketball talents led him to play for Marshall University. Kokey was a dedicated mechanic at the DuPont Belle Works plant before transferring to the DuPont Washington Works plant until he retired in 1992. Kokey loved Parkersburg South sports, was a member of the Sideliners and spent countless volunteer hours to maintain Godbey Fields for the community. He coached many baseball players in the Colt league with his buddy Charlie Tice and was an avid WVU sports fan. After moving to Fla., he traveled back home to the country roads of West Virginia each Fall to visit his family and friends who meant so much to him. Most importantly, he loved a good hot dog and a good conversation. He will be remembered for his practical wisdom and life lessons he shared so freely. Kokey had an immeasurable love and support for his children and grandchildren's accomplishments and milestones. He was most proud that each of his children and grandchildren were college graduates. Kokey is survived by his high school sweetheart and wife of 64 years, Dorothy "Dottie" Patton, his dear cousin Utrica "Udy" (Bugs) Callison, and three children: Yale "Cub" C. Patton III of Scottsdale, AZ, Leslie (Bob) Nolan of Little Hocking, OH, and Alex (Lori) Patton of Monroe Township, NJ. Five grandchildren: Jeff Maiden, Lauren (Chris) Hendricks, Chelsey (John) Snyder, Alexa and Reece Patton. Three great grandchildren: Brecken and Farrah Hendricks and Sophia Snyder. He will be laid to rest at Montgomery Memorial Park, London, W.V. and a celebration of life will be held later this year. Online condolences may be sent to the family at lohmanfuneralhomes.com or www.lamberttatman.com.

The family of Yale "Kokey" C. Patton Jr. created this Life Tributes page to make it easy to share your memories.

Send flowers to the Patton family.