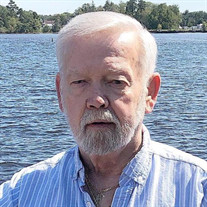 William F. “Bill” Fox, 77, of Vienna, passed away on Wednesday, September 1, 2021 at Marietta Memorial Emergency Room Belpre Campus. He was born September 19, 1943, in Parkersburg, a son of the late Cecil and Louise Humphrey Fox. Bill was a 1962 graduate of Parkersburg High School. Along with his wife, he was Co-Owner of Foxes Florist of Vienna. He enjoyed coin collecting and was a member of the Roman Catholic Church. He is survived by his children, Bill Fox (Madeleine) of Wisconsin, Angie West (Duane) of Vienna and Michael of Parkersburg; sister in-law, Brenda Teter (Larry) of Parkersburg; two brothers, Mike Fox (Rebecca) and Wayne Fox; grandchildren, Nick, Jack, Grace, Megan, Christian and Levi; and great-granddaughter, Amelia. In addition to his parents, Bill was preceded in death by his wife of 33 years, Linda L. Mossburg Fox; step-son, Steve Tanner; three brothers, Paul, Sam and Fred Fox. Mass of Christian Burial will be held at 10 am on Tuesday, September 7, 2021 at St. Michaels Catholic Church of Vienna with Father John Gallagher officiating. Burial will follow at Mt. Olivet Cemetery. Visitation will be from 2-4 and 6-8 pm on Monday at the Lambert-Tatman Funeral Home, Vienna. In lieu of flowers donations may be made to the Parkersburg Humane Society 530 29th St. Parkersburg, WV, 26101. Online condolences may be made at www.lamberttatman.com.

The family of William F. "Bill" Fox created this Life Tributes page to make it easy to share your memories.

Send flowers to the Fox family.