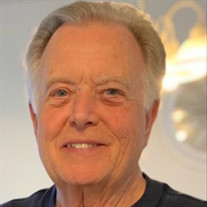 Terry Shuman, 74, went home to be with the Lord, on April 22, 2021 at Camden Clark Medical Center, with his family by his side. His battle with various medical problems showed his courage in facing life challenges with a smile. Terry was born September 15th, 1946 to the late Ray and Geraldine Shuman. He graduated from Bridgeport High School and then later moved to Vienna, WV where he started a career at Dominion Gas. Terry married his late wife, Janet, in 1979 and started his own furniture repair business called “Ye Old Furniture.” Terry was a charter member of New Hope Baptist Church and served as a Trustee for many years. The simplest pleasures in life brought the most joy to Terry. In his younger days, he enjoyed trout fishing in the mountains of WV. After he retired, he spent his time walking in the mall and sitting outside on his back porch swing. He loved WVU basketball and Bible study coffee dates with his friends. Terry devoted much of his time and energy into his granddaughters and loved watching them grow up. Terry was a lot of things in life, but his greatest title was “Papaw T.” Terry leaves behind two sons, Patrick Beall (Sue) of Vienna, WV, Eric Leach (Lara) of Lexington, KY, and one daughter, Deborah Blair (Bryan) of Washington, WV; and 6 grandchildren: Alex, Belle, Skyler, Braylie, Jadyn, and Avery. In addition to his parents, Terry was preceded in death by his wife, Janet Shuman. Funeral services will be held at 1:00 pm on Monday, April 26, 2021 at the Lambert-Tatman Funeral Home, Vienna with Pastors David Carrico and Troy Nesselrode officiating. Burial will follow at the Parkersburg Memorial Gardens. Visitation will be from 2:00 – 6:00 pm on Sunday at the funeral home and one hour prior to the services on Monday. In lieu of flowers, the family is asking for donations to The Good Samaritan Center in Terry’s memory.

Terry Shuman, 74, went home to be with the Lord, on April 22, 2021 at Camden Clark Medical Center, with his family by his side. His battle with various medical problems showed his courage in facing life challenges with a smile. Terry was born... View Obituary & Service Information

The family of Terry Lee Shuman created this Life Tributes page to make it easy to share your memories.

Send flowers to the Shuman family.