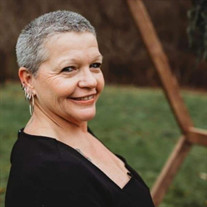 Tammy Jean Staats-Pierce of Washington, WV passed away peacefully at Camden Clark Medical Center on October 17, 2021 with her family by her side. She was born December 17, 1964 to the late Walter and Agnes (Boyce) Staats. She was a beloved wife, mother, grandma and friend. She enjoyed cooking and was quite good at it. She was well known for her pepperoni rolls. If you ever left her house hungry, it was your own fault because she always had a home cooked meal ready for anyone. She loved being outside and spending time with her family and friends. She enjoyed going on rides with her husband. She previously worked at PWP/Pactiv for more than a decade. Currently, she was employed as a housekeeper at the Holiday Inn Express. She was motherly to all and made everyone feel like family, any time they came to “the farm,” regardless of the outside world, they were made to feel at home. She is survived by her husband of 30+ years, Tim Pierce. Two children, her baby girl Natasha “Tash” (Morgan) of Vienna, WV, and beloved son, Chuck (Heaven) of Mineral Wells, WV. She had two grandkids that she absolutely adored, Braylen and Sinthia Staats, and one grandbaby on the way, in which she was very excited about. She had several bonus kids, including, Joby Sims, Joe Valdez and Billy Vandale; several sisters, Angie “Inky”, Trena, Sandy and Ruth; two brothers, Jodie and Herman, as well as many nieces and nephews, lots of friends to whom she loved dearly, her dogs, Rex and Jagger. She will be hugely missed by all that loved her. In addition to her parents, she is proceeded in death by her beloved sister, Roberta “Bird” Madison, niece, Roberta Lynn “BirdaLynn” Fordyce and nephew Jamie Freeman, as well as her sister, Karen Hall, and two brothers, Timothy and Jerry Staats and nephew, Timothy Wilson. Funeral services will be held 3:00 p.m. Wednesday, October 20, 2021, at Lambert Tatman Funeral Home on Pike Street, South Parkersburg. Visitation will be from 11:00 a.m. until time of services Wednesday at the funeral home.

Tammy Jean Staats-Pierce of Washington, WV passed away peacefully at Camden Clark Medical Center on October 17, 2021 with her family by her side. She was born December 17, 1964 to the late Walter and Agnes (Boyce) Staats. She was a beloved... View Obituary & Service Information

The family of Tammy Jean Pierce created this Life Tributes page to make it easy to share your memories.

Send flowers to the Pierce family.