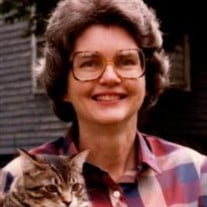 Starr S. Emrick, 87, of Parkersburg, passed away Monday, January 17, 2022 at Cedar Grove Assisted Living. She was born March 29, 1934 in Parkersburg, a daughter of the late Harry T. and Charlyn Morrison Sarber. She was the great-great granddaughter of Peter G. Van Winkle, who was instrumental in forming the state of West Virginia and who served as the state’s first Senator. Starr was a 1952 graduate of Parkersburg High School. She was a homemaker most of her life and volunteered at St. Joseph Hospital in her earlier years. She was also a member of the Junior League of Parkersburg. Starr was Presbyterian by faith. Starr loved cats, taking care of her own for many years. She also enjoyed feeding the abandoned neighborhood strays. She loved the ocean and spent 30 winters in Naples, Florida. She also took her children and grandchildren to Ocean City, New Jersey for summer vacations. Facing the challenge of hearing impairment since the age of 3, Starr still enjoyed watching music shows, especially Gospels. Her favorite hymn was “I’ll Fly Away”. She was a kind and generous soul and a wonderful mother, grandmother, and wife. Surviving is her husband of 67 years, Lewis Emrick, whom she married November 4, 1954; a daughter, Joyce Emrick de Linas (Gustavo); a son, Wade Emrick; two granddaughters, Cassady (Justin) Clary and Katie (Josh) Edman; and four great-grandchildren, Lilah, Landon, Harper, and Connor. In addition to her parents, Starr was preceded in death by an infant brother, Charles Sarber and a newborn grandson, Jess Duvall. Graveside services at Riverview Cemetery will be held at a later date at the convenience of the family. Lambert-Tatman Funeral Home, Green Street, Parkersburg is honored to serve the Emrick family. The family wishes to thank Amedisys hospice for the amazing personnel and services they provided, and the staff of Cedar Grove Assisted Living for their kind and compassionate care. In lieu of flowers, donations can be made to the Humane Society of Parkersburg.

Starr S. Emrick, 87, of Parkersburg, passed away Monday, January 17, 2022 at Cedar Grove Assisted Living. She was born March 29, 1934 in Parkersburg, a daughter of the late Harry T. and Charlyn Morrison Sarber. She was the great-great granddaughter... View Obituary & Service Information

The family of Starr S. Emrick created this Life Tributes page to make it easy to share your memories.

Send flowers to the Emrick family.