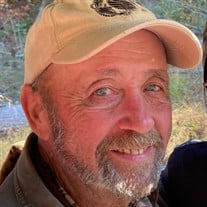 Stan Pursley, 75, of Parkersburg, passed away Friday, February 25, 2022 at Riverside Methodist Hospital in Columbus, OH following a sudden illness. He was born October 18, 1946, in Spencer, WV, a son of the late H. W. “Bill” Pursley and Gladys Wright Pursley. Stan was a loving husband, father and grandfather. He was in the car business for over 40 years and always knew people by the car they drove and when they bought it. Stan served proudly in the US Marine Corp during the Vietnam War. He was a recipient of the distinguished Purple Heart, having been wounded in battle fighting valiantly for our country. Although he didn’t talk much about the war, he was a proud American and Marine, and was honored to serve his country. During their marriage, Stan, Gloria and Nicole spent many years boating on the Ohio River, until he fell in love with a little cabin and some land in Ritchie County in the early 90’s. From that moment on, if you wanted to see Stan and Gloria on the weekend, you could find them at the cabin. Stan enjoyed hunting, four wheeling and being in the great outdoors. He especially enjoyed introducing newcomers to the area and taking them on their first wild ride on the four wheeler. The muddier the better. Stan was a devoted husband to Gloria for over 50 years, sweeping her off her feet in High School with his good looks and fancy car, a loving and proud father to Nicole, father in law to Derek, whom he deeply loved and respected, and proud Papaw to Emily (16) and Alex (13). He never missed an important milestone or event, and was often in Charlotte cheering them on and spending time with the ones he loved most. Stan is also survived by his sister, Susan Shappell (Gerry) of Fredericksburg, VA; and sister-in-law, Barbara Pursley of Jackson, GA. In addition to his parents, Stan was preceded in death by one brother, L.S. “Steve” Pursley. A memorial service will be held at 7 pm on Friday, March 4, 2022 at Lambert-Tatman Funeral Home, Vienna with Pastor Matt Dawson officiating. American Legion Post 15 of Parkersburg along with the Marine Corp League will present full military honors. Visitation will be from 4-7 pm on Friday at the funeral home. In lieu of flowers the family asks that you consider giving to your favorite charity or Stan’s favorite charity, St. Jude’s Children’s Hospital. “Stan the Man” was a friend to everyone, and a father figure to some, and his loss will be deeply felt by many.

The family of Stan R. Pursley created this Life Tributes page to make it easy to share your memories.

Send flowers to the Pursley family.