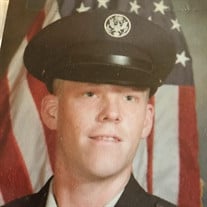 Ronald Glen Wenmoth, 65, of Williamstown, West Virginia passed from Myasthenia Gravis on March 30, 2022 at Marietta Memorial Hospital. He was born March 3, 1957 in Parkersburg, West Virginia, the son of the late Samuel Wenmoth III and Dorothy (Oconn) Wenmoth. Ronald was a graduate of South Parkersburg High School before joining the Air Force in 1979. He served in various stations as Security Police to include San Vito, Italy until his honorable discharge in 1986. He celebrated 43 years of marriage to his wife Rebecca (Burns) Wenmoth until his passing. He enjoyed a long career of 18 years with the Parkersburg News and Sentinel before starting his 19 years battle with Myasthenia Gravis. He was a man very dedicated to his family and was determined to give them the life he believed they deserved. He enjoyed donating to St. Jude and did so on a regular basis. The family would ask for any donations to be sent to St. Jude. He also enjoyed working with livestock, NASCAR, watching the Golden State Warriors and WVU football. In addition to his wife Rebecca, he is survived by his two sons, Justin and his wife Kristina Wenmoth of Lewisport, KY and Ashley and his wife, Jessica Wenmoth of Honolulu, HI;. two siblings, Pamela Clinton of Parkersburg, WV and Mel Wenmoth of Franklin, PA; five grandchildren, Layla Williams, Laven Wenmoth, Ashley P. Wenmoth, Lucas Wenmoth and Jessamae Wenmoth; and many nieces and nephews. Visitation will be held Tuesday, April 5, 2022 from 3-5 pm followed by a service of remembrance at 5 p.m. at Lambert-Tatman Funeral Home, 2333 Pike St, Parkersburg, WV with son, Ashley Wenmoth and grandson, Laven Wenmoth officiating. All who wish to remember him are welcome to join. Condolences may be sent to the family at www.lamberttatman.com

The family of Ronald G Wenmoth created this Life Tributes page to make it easy to share your memories.

Send flowers to the Wenmoth family.