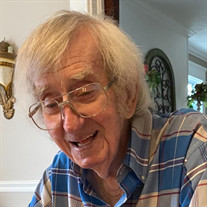 Lyman Gregory Prince, 89, a lifelong resident of Parkersburg, WV, passed away on Thursday, Jan. 14, 2021 from complications following hip surgery. He was the only child of Lyman Prince and Juanita Fisher Prince, also of Parkersburg, WV, who preceded him in death. He is survived by his five children: Alisa Prince of Hilliard, OH; Colleen Prince (Allen Russell) of Peapack, NJ; Ryan Prince (Rhonda) of Sandyville, WV; Deirdre Prince (Steve Dean) of Parkersburg, WV; and Rod Prince (Staci) of Honesdale, PA. He also leaves behind seven grandchildren: Alicia Waskey (Robert) of Ravenswood, WV; Andrew Prince of Raleigh, NC; Ashley Prince of Vero Beach, FL; Sloane Prince of Baltimore, MD; Courtney Simpson (Euan) of Kalamazoo, MI; Shane Prince of Newark, DE; and great grandchild Alex Waskey of Ravenswood, WV. In addition to his children and grandchildren, he is survived by his former wife Anita Uhrhane of Parkersburg, WV; caretaker Belinda McConaha; and his beloved cat, Lucky Lady. Greg graduated from Parkersburg High School and attended West Virginia University. He was an avid WVU football and basketball fan. When his sons played in Little League baseball, he was known for awarding home run-hitters with certificates for a free gallon of ice cream from the Hasty Shopper Dairy Store. He served as a medic in the U.S. Army in Korea from 1952-1954 in the 40th Infantry Division 223rd Regiment as a Sergeant and was awarded the Soldier's Medal — the nation's highest noncombat honor — for rescuing the driver of an ammunition truck that had plunged over an embankment, caught fire, and exploded. Greg then became Vice President of Parkersburg Creamery, co-owned Hasty Shopper Dairy Stores, created Greg Prince Distributors Inc., and owned and operated Prince Rentals with his daughter, Deirdre. The family would like to express their gratitude to the loyal employees who have worked with him for so many years. Greg donated his body to West Virginia University Medical School for medical research. Lambert-Tatman Funeral Home of Parkersburg is serving the family. Due to COVID-19, there will be no public service. A memorial will be held in the fall following CDC guidelines for safe travel and gatherings. For those wishing to express their condolences, these can be made at https://www.lamberttatman.com/obituaries and donations can be made to Habitat for Humanity of the Mid-Ohio Valley in lieu of flowers. He is loved and will be dearly missed. An online guestbook for condolences is available at www.lamberttatman.com.

Lyman Gregory Prince, 89, a lifelong resident of Parkersburg, WV, passed away on Thursday, Jan. 14, 2021 from complications following hip surgery. He was the only child of Lyman Prince and Juanita Fisher Prince, also of Parkersburg, WV, who... View Obituary & Service Information

The family of Lyman Gregory Prince created this Life Tributes page to make it easy to share your memories.

Send flowers to the Prince family.