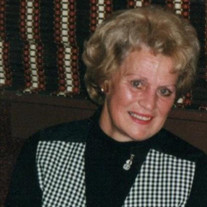 Joyce Lavern (Engebretsen) Guseck, went to be with her Lord and Savior on April 4, 2022, with her daughter by her side. She was born in Green Bay, WI, to the late William and Birdie (Bean) Engebretsen. Joyce was the fourth of five children. As a young child, Joyce spent a good deal of her time playing the piano at the Green Bay Yacht Club where her father was a lifetime member. Her talent for playing by ear was a gift, her father was proud to show her off. Joyce attended West High School in Green Bay. At seventeen her first job was at St. Vincent Hospital. In 1954, she met and married Ervin Guseck at the Calvary Lutheran Church in Green Bay. After having their first two children they decided to move to Coleman Wisconsin where Ervin’s dream was to farm. Although, it wasn’t her first choice Joyce became a hard worker and dedicated to their life on the farm. As the farm grew so did their family, adding two more children. Joyce and Ervin were members of the First Baptist Church in Pound where they were baptized and raised their four children. Her love for the Lord was first in her life. Joyce often worked with the kitchen staff and for all types of events in the church. When their children were older she worked at Coleman Products. Joyce was known for her gift of being a great cook and baker; no one ever walked away hungry at the Guseck farm. Most recently, she assisted with the Awana’s puggles group at Fellowship Baptist Church. She loved gardening, canning, growing flowers and country music. Joyce loved polka dancing and going to Country Music Festival every year with her friends. Her favorite polka band was Musical Brass. She was an amazing woman and we will all miss her greatly. Joyce is survived by four children, Cathy (David) Delebreau, Connie (Joseph) Johnston, Brent Guseck and Linda Davis; niece, Deanna Engebretsen; grandchildren, Stephanie, Ryan (Joy), Adam, Brittany (Nathan), Casey (friend, Natalie), Chelsey (Erik), Joey, Kelly (Kevin), Kevin (Cherish) and Katy; great-grandchildren, Drew, Kevin, AJ, Addison, Keira, Colin, Sophia, Aria, Brennan, Brahm, Tyler, Ava, Haley and Cameron. In addition to her parents, Joyce was preceded in death by her husband, Ervin; brothers, Don, Kenny and Bill; sister, June; grandson, Robbie; three nieces, three nephews; in-laws, Emil and Augusta; and seven brother-in-law’s and eight sister-in-law’s. Funeral services will be held at 2:00 pm on Saturday, April 9, 2022 at Fellowship Baptist Church, Vienna, with Pastor Brian Leversee officiating. Burial will be at the First Baptist Church Cemetery in Pound, WI. Visitation will be from 12:00-2:00 pm at the church. The family request flowers be sent to the church prior to the funeral service. Condolence cards or gifts of remembrance may be sent to Connie Johnston, N4012 Patti Lane, Marinette, WI 54143. Online condolences may be made at www.lamberttatman.com. Lambert-Tatman Funeral Home, Vienna is honored to assist the family.

Joyce Lavern (Engebretsen) Guseck, went to be with her Lord and Savior on April 4, 2022, with her daughter by her side. She was born in Green Bay, WI, to the late William and Birdie (Bean) Engebretsen. Joyce was the fourth of five children.... View Obituary & Service Information

The family of Joyce Lavern Guseck created this Life Tributes page to make it easy to share your memories.

Joyce Lavern (Engebretsen) Guseck, went to be with her Lord and...

Send flowers to the Guseck family.