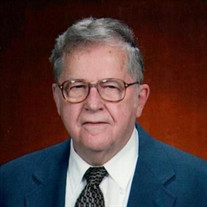 James Everett Ritchea, 93, of Parkersburg, WV, was called home by his Heavenly Father on November 10, 2020 at Cedar Grove Assisted Living with his loving wife of 72 years Betty (Porter) Ritchea by his side. He was born on July 23, 1927, along with his twin sister, Effie Ritchea Schultz, to the late O.J. Ritchea and the late Myrtle (Duskey) Ritchea. James graduated from Parkersburg High School in 1945 and immediately enlisted in the U.S. Navy where he served honorable during WWII and beyond. Jim returned to Parkersburg and married Betty Porter on March 12, 1948. Jim worked at Johns Manville of Vienna for over 31 years as a supervisor. He was a lifetime member of Broadway Harmony Baptist Church. Jim was in community service his entire life. Mr. Ritchea was elected to Parkersburg City Council for two terms and also ran for Mayor. He served on the Wood County Recreation Board and spent several decades on the Parkersburg Housing Authority. Jim was also a member of the Wood County Democrat Executive Committee. One of his favorite activities was the South Parkersburg Lion’s Club where he served as President. From the time Parkersburg South became a school in 1967, Jim worked the ticket gate at all South sporting events for over 40 years. He was inducted into the South Football Hall of Fame. His Masonic work was highlighted by becoming a thirty-second degree Mason in Mt. Olivet #3 as well as membership in Nemesis Shrine, both the Scottish Rite and York Rite, the Blue Lodge and the Calvary Commandery #3 Knights Templar. Jim was preceded in death by his parents, a granddaughter, Sara Beth Ritchea of Parkersburg; and a son in-law, Homer Vaughan. In addition to his wife, Betty and twin sister, Effie Schultz of Zelienople, PA; two children, Jody L. Vaughan of Parkersburg and Mark A. (Cindy) Ritchea of Washington, WV; four grandchildren, Ashley Curry and Amanda Wilson of Parkersburg, Chris (Anna) Vaughan of Celina, TX and Megan (Joe) Morgan of Massillon, OH; seven great-grandchildren, Zoe Wilson, Zach Wilson, Keenan Curry, Chace Curry all of Parkersburg, Isaac House of Mountain Home, AR, Oliver Vaughan of Celina, TX and Levi Morgan of Massillon, OH; one great-great-granddaughter, Preslee McCauley of Parkersburg completes the five generations of the Ritchea family that “Pappaw” loved so dearly. Funeral services will be held at 1:30 pm on Friday, November 13, 2020 at Lambert-Tatman Funeral Home, Pike St, south Parkersburg with Jim’s daughter, Jody Vaughan delivering the eulogy, also participating, will be Pastor Gary Rapking and Larry Maxwell. Burial will follow at Sunset Memory Gardens. Visitation will be from 11:30 am – 1:30 pm on Friday at the funeral home.

James Everett Ritchea, 93, of Parkersburg, WV, was called home by his Heavenly Father on November 10, 2020 at Cedar Grove Assisted Living with his loving wife of 72 years Betty (Porter) Ritchea by his side. He was born on July 23, 1927, along... View Obituary & Service Information

The family of James Everett Ritchea created this Life Tributes page to make it easy to share your memories.

Send flowers to the Ritchea family.