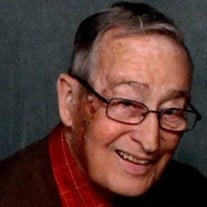 Daniel “Danny” Webster Darnold, 87, of Parkersburg, WV, passed away August 16, 2021, at home, after battling Wegener’s Granulomatosis for 16 years and taking dialysis 14 years. He was born in Cairo, WV, July 28, 1934, the son of Gayford and Fay Alkire Darnold. He was drafted into the United States Army and served his Country from 1957-1959. He worked for Cook Motor Lines for 32 years and Yellow Freight four years, was a Teamster, and won many WV State Truck Driving Championships and two National Truck Driving Championships during his career. He was a member of the Pioneer Antique Auto Club and enjoyed restoring and driving his 1913 Ford Model T. He was a member of the 36th Street Church of Christ in Vienna, WV. Danny is survived by his wife of 57 years, Wanda Mae Bibbee Darnold, two sons, Brent (Charlotte) Darnold of Washington, WV, and Ryan Darnold of Little Hocking, OH, and one daughter, Barbara (Adam) Johnston of Parkersburg, WV, three grandchildren, Whitney (Josh) Amos of Belleville, WV, Wade (Chrissy) Darnold of Belleville, WV, and Nash Darnold of Washington, WV, five great-grandchildren, Wyatt and Lorna Amos, and Austin Jenkins, Daniel and Rhett Darnold, and several nieces and nephews. In addition to his parents, he is preceded in death by his sister, Lois Cunningham, and his two brothers, William “Bill” Darnold and Jerry Darnold. Visitation will be held from 4-6 pm on Thursday, August 19, 2021 at Lambert-Tatman Funeral Home, Vienna with a funeral service following at 6 pm with Pastor Michael Moss officiating. A graveside service will be held at 11 am on Friday, August 20, 2021 at Riverview Cemetery in Williamstown.

The family of Daniel W. Darnold created this Life Tributes page to make it easy to share your memories.

Send flowers to the Darnold family.