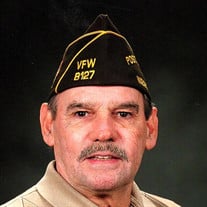 Bill S. Terrell, 73, of Vienna, WV passed on the evening of November 23rd, 2020 at his residence after a hard battle with emphysema and fibrosis of the lungs. Bill was born in Parkersburg, WV on December 16th, 1946 to his father, Cecil Terrell, and mother, Iris Grayce Hopkins. He attended Jackson Jr. High, Washington Jr. High, and Parkersburg High School. Bill began work at the age of 13, working at Amicks Texaco, Ambrose Texaco, Freed Ashland, and Schofield Texaco before venturing to California, where he worked for the KB Clarke Maintenance Company. Two years later, he returned home to WV and joined the United States Marine Corps. Bill served as a marine in the Vietnam War from 1966-1967. Upon his return, Bill began a long history of serving his community, in which he took pride in being an active member. He owned and operated 5 businesses: ABC Maintenance, Vienna Auto Sales, Freedom Rental Car, Vienna Apartment Rental, and Vienna Title and Licenses Services. Bill was also a past Vice President of the Vienna Business Association and served as a Commander of the VFW Post #8127 of Vienna, American Legion Post #15 of Parkersburg, and AM Vets Post #34 of Parkersburg. In addition, Bill was one of the original founders of the Rollin Oldies Car Club, for which he served as President for 20 years, as well as being an active member of VFW Post #1212, Masonic Lodge #172, and the Marine Corp League. Bill leaves behind his loving and dedicated wife of 52 years, Evelyn Cosner-Terrell. He is survived by his sons, Shane Terrell and his wife Andrea Ballengee of Morgantown, and Randy Terrell and his wife Julie of Vienna, as well as two beloved grandchildren Emily Terrell of Vienna and Skyler Terrell of Morgantown, brothers Mike Terrell and wife Kay of Parkersburg and Pat Terrell of Walker, sisters Sharon Woodyard of Vienna and Loris Brown of Georgia. In addition to his late parents, Bill is preceded in death by his sisters Darlene Martin and Karen Yeager of Parkersburg, step brothers Cecil Terrell of Washington State and Garland Hopkins of Missouri. Bill will be remembered for his devoted love of family, especially his grandchildren in which he served as beaming light of support. He spent much of his time frequenting their football and soccer games, wrestling matches, and choir performances. Bill Terrell was a respected member of the Vienna Community, loving grandfather, and a proud marine. Semper fidelis. Bill requested a cremation by Lambert Tatman Funeral Home in Vienna, WV. A celebration of life service will be held at a later date.

Bill S. Terrell, 73, of Vienna, WV passed on the evening of November 23rd, 2020 at his residence after a hard battle with emphysema and fibrosis of the lungs. Bill was born in Parkersburg, WV on December 16th, 1946 to his father, Cecil Terrell,... View Obituary & Service Information

The family of Bill S. Terrell created this Life Tributes page to make it easy to share your memories.

Bill S. Terrell, 73, of Vienna, WV passed on the evening of November...

Send flowers to the Terrell family.