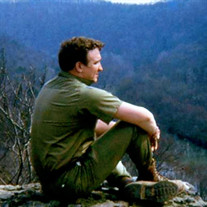 Arwin Lloyd “Art” Trippett left his earthly restraints while surrounded by his family and walked into the arms of his Heavenly Father on Thursday April 29, 2021. Arwin was born September 6, 1945 in Ventura, California to Lloyd and Rhoda (Bell) Trippett. Lloyd and Rhoda were from Wirt County but lived in California briefly while Lloyd was serving in the United States Navy. He grew up in the Red Hill Community where he participated in the Boy Scouts, attended Red Hill United Methodist Church, and met and married the mother of his children, Shirley Trippett. Arwin graduated from Parkersburg High School in 1963, and enlisted in the United States Army in 1964. He served in Korea and Vietnam, where he received a commendation for saving the life of another soldier. Arwin and his family returned to Parkersburg shortly after his honorable discharge in 1968. He obtained employment at (Borg Warner) GE from where he would go on to retire. Arwin was a Christian. He attended the Baptist Temple in Parkersburg, where he enjoyed helping Pastor Scott with his visits to church members so he could do something he enjoyed: talk. He never met a stranger. He loved the Big Reds, WVU, and whoever everyone else was cheering against. Art had a passion for playing bluegrass music with his bluegrass family. He could pick guitar and sing but was known for playing the stand-up base. Art dearly loved his bluegrass family and they loved him. Arwin is survived by one brother, Marvin Trippett (Donna) and preceded in death by his youngest brother, Darwin Trippett, and his parents. He also is survived by his children; Jacqueline “Jackie” Trippett Martin (Todd Hill), Jefferson “Trip” Trippett (Ivelisse) and Jessica “Jessie” Trippett (Bridie Merritt). He passed down his love for history, television, outdoors and sports to his children. Arwin is survived by his grandchildren Emily Martin, Brooks Martin (Jessi Collins) and Joshua Trippett; nephews, Kevin Trippett (Deborah), Brian Trippett (Sharon), Hunter Trippett, Xander Trippett and Ryland Trippett; and nieces, Naiya Trippett and Madison Trippett. In addition to his parents and brother, he was preceded in death by his wife, Laura “Annie” in 2017. The Trippett family would like to thank the staff at Camden Clark Hospital (5 North, Advanced Care and Palliative Care) for the compassion and care given to Arwin in his last days. Each of you will forever be in our hearts. You are appreciated! Thank you! In 2016, Arwin suffered two strokes following open heart surgery. He fought long and hard all the way to his last breath as he promised his son he would. The Trippett family would like to thank Stonerise (Carehaven) for taking care of Arwin for the four and a half years following his strokes. Many of you became family to him. Visitation will be at Lambert-Tatman Funeral Home, Pike Street, Parkersburg on Monday, May 3, 2021 from 2-4 and 6-8 pm and 1 hour prior to services held at Lambert-Tatman Funeral Home at 11:00 am on Tuesday, May 4, 2021 with Pastor Scott Wight officiating. In lieu of flowers the family asks that you donate to your favorite charity. In compliance with CDC guidelines, face masks are required and social distancing will be observed. Please visit lamberttatman.com to share messages of comfort with the family.

Arwin Lloyd &#8220;Art&#8221; Trippett left his earthly restraints while surrounded by his family and walked into the arms of his Heavenly Father on Thursday April 29, 2021. Arwin was born September 6, 1945 in Ventura, California to Lloyd... View Obituary & Service Information

The family of Arwin Lloyd Trippett created this Life Tributes page to make it easy to share your memories.

Send flowers to the Trippett family.